The introduction of Tobacco in England is often given as 1586, when Sir Walter Raleigh returned with a consignment from Virginia in North America. However, it is likely that Spanish and Portuguese sailors introduced the habit to British sailors before this date.

Initially, tobacco was believed to have wonderous properties for one’s health, curing amongst other things sore teeth and bad breath! King James 1st (reigned 1603-1625) failed to agree, banning the use at court, preventing its growing in England and imposing import taxes. Even with the disapproval of the King, smoking increased in popularity, initially with the rich but soon by all in society.

A pipe was typically used to smoke the tobacco – usually made of clay, which would be delicate and easily broken. Once damaged, the pipe would be simply thrown away by the smoker. It would be 1881 before a cigarette making machine would be invented and the use of tobacco pipes started to decline.

In 1969, just prior to the 1970 merger between the National Provincial and Union Bank and the Westminster Bank, workmen were excavating behind 13 High Street, Chesham in preparation for laying a new car park. They uncovered the broken clay pipes displayed here. The pipe’s simple undecorated design and angled tobacco bowl rim suggests they were produced around 1640. The possible exception is the third pipe down with its longer bowl which may date to 1680.

When new, these pipes would have shafts up to 12 inches (30 cm) long to provide the user with a cool smoke. As tobacco became more available and its price reduced, the size of the pipe bowl would increase with pipes produced later in the 1600’s. Examples produced in the 1700’s started to be decorated with intricate patterns and designs. 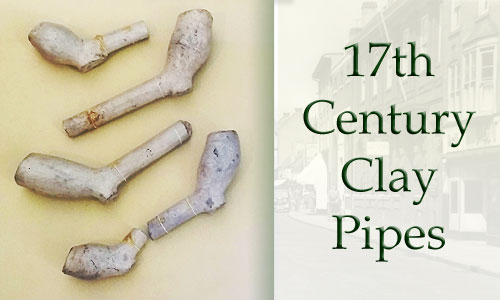 Back to all exhibitions

or View our other exhibitions